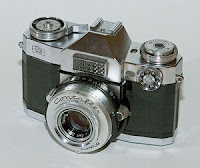 My first serious camera was the Zeiss-Ikon Supercontaflex, a hand-me-down from my father.  I had an Agfa rangefinder before the Zeiss that I had to use a separate  light-meter and telemeter.  I can no longer remember what it looked like.

I had Super-Contaflex model, but same looks as the picture, though.  It was a consumer grade camera that competed very successfully against the very expensive Leica M2 and M3.

The Contaflex was a very interesting camera and I believe the first of its kind. It was an SLR, with a leaf shutter, and  without an up-and-down or rapid return  mirror. Therefore, only the front element could be interchanged. The advantages were a smaller and quieter SLR. The main disadvantage was that the lenses focal length ranged from 35mm - 115mm.
The Zeiss Tessar 50mm f/2.8  was a very sharp lens.  I used to blow the slides up on a massive screen and they never lost resolution.  On the other hand, when I "upgraded" to the Canon A1 and AE1 system, in the mid 70's, the photos taken with the Canon 50mm f/1.4 , projected on the same screen, lost resolution, they were not as sharp, and the color rendition was not the same.
Posted by Ramesses at 10:44 PM