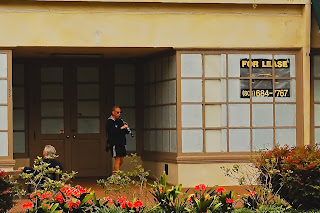 "Street Photography" to me is much more than the traditional photos of having a subject, simplifying the photo, and putting all the attention on the subject. Then, it becomes a portrait set in the streets. To me, street photography must have a primary subject, a secondary one - a structure like a building, - at least a tertiary subject, and have a dramatic contrast between all the subjects.
"Street Photography" can also be described as social commentary type of photography or even photo journalism without an assignment or deadline. For example and to illustrate what I'm saying, let us say that I take the photograph of a homeless person or a beggar, in front of a building. The main subject is obvious; it is the beggar. The social commentary might be to highlight the present hard economic times. I can isolate the beggar and simplify the photo, but is that enough? IMHO, that is a portraiture of a beggar set in the streets. I could have had the same same social commentary of the beggar done in a studio. 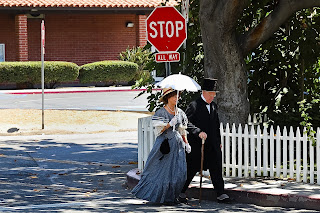 . Let us say that the beggar is in front of Tiffany. That is a much more powerful photo with a much stronger social commentary. We have a beggar pleading for basic needs like food, clothing, and shelter in front of a store world renown for its expensive and exquisite jewelry - the have-nots vs opulence - a powerful statement.

Lets bring a tertiary subject also in focus. There is a man, standing in the entrance to Tiffany, who works for the store, staring at the beggar. What is he thinking?
That is what I strive for with "Street Photography." It is not that easy, but I strongly feel that it is much more than a portraiture set in the streets. It must have some underlying social commentary and dramatic contrasts between the different subjects.

If I was able to shoot the the photo of the beggar and Tiffany and bring it up for critique, it would be chopped to pieces. What is this photograph about? Is it the beggar, Tiffany, or the man standing in the entrance to Tiffany? This photograph is too confusing - it has too many subjects and it is distracting. And so on. The photo is about all three subjects and how they interact with each other, besides the photographic value. Without the dramatic contrasts between all three subjects, it is not the same photo.
Posted by Ramesses at 12:25 PM